The problem of finding and using “spare parts” for the human body is not new. It is still a pressing issue even though we have been witnessing true miracles lately, including bionic eyes, bionic limbs, biomechanical hearts, etc. Furthermore, the perspective of creating whole organs out of tissue culture is no less than astonishing.
As dental practitioners we should be proud of the fact that dental implantology is probably as old as mankind itself. The very first attempts for replacing a lost organ with an implant are related to teeth. The origins of this practice are to be found in the ancient Mayan civilization, the Indian population of South Mexico, Guatemala, Belize as well as some parts of Honduras and Salvador. They replaced lost teeth by attaching pieces of quartz and amber to the jaw. Some historians and archeologists suggest extraterrestrial intervention but can anyone tell for sure? 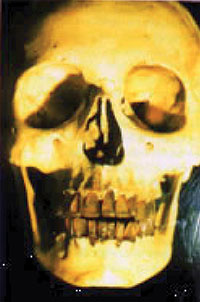 A picture of a skull found in a former Mayan habitat and dated to be over 5000 years old reveals incredible implant technique.

It is a well-known fact, evident in exposed mummies, that ancient Egyptians implanted teeth made of “the holy stone of Memphis” and of ivory. It is quite impressive to know how things worked around 3000 BC. Indeed in the territory of what is now Honduras a skull fragment was unearthed revealing an implant of a lower incisor made of dark stone. 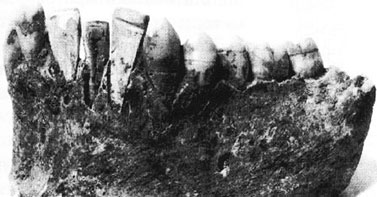 A picture of a human jaw bone displayed at Harvard University Museum.  According to Andrews the implanted tooth is tightly fixed within the bone.

The ancient implant concept involved construction of “implants” similar to natural teeth and placing them right into the alveoli without any prior treatment of the implant site. Implanted teeth are considered the first implants ever placed in human body thus marking the origin of implantology both as science and practice.

In modern implantology history the concept of subperiosteal implantology came to life much later, in the 1940s. Its founder is considered to be Dahl who implanted back in 1943 an entire subperiosteal fenestration in the mandibula with four abutments to carry a fixed prosthesis. Later he also implanted a similar structure in a highly atrophic mandibula. 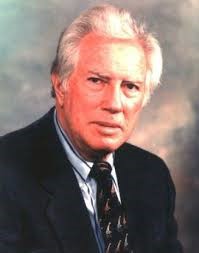 The concept of intraosseous implants involving a wide range of designs and methods which is so widespread nowadays only became popular in the late 1980s after Branemark presented his theory of osseointegration. 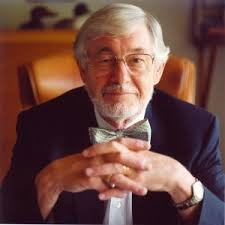 The theory of osseointegration gave a strong impetus to the development of intraosseous implantology and the design of intraosseous implants. Subperiosteal implantology remains a little bit pushed aside by this whirl. However, the development of computer assisted technologies (CAD / CAM) brings about its Renaissance and puts it in its rightful place in the science and practice of implantology.
Nowadays the success rate of subperiosteal implants is comparable to that of intraosseous implants. The two methods could be well combined in some cases of specific anatomic and physiological characteristics while there are cases when subperiosteal implants are the better or the only possible treatment.
Despite the skepticism, the modern development of subperiosteal implantology is a very good restorative solution for partial or complete edentulism.
Here is a retrospective implantology review:
•    The Inca and Maya civilization – a 5000-year old skull with quartz and amber tooth implants
•    Ancient Egypt – a sacred stone from Memphis – tooth implants in mummies
•    Europe – 1810 – a metal root placed in the alveoli of extracted teeth
•    Europe 1890 – artificial root implant
•    1960s – Prof. Linkow, New York – “third teeth”
•    1980s – Prof. Branemark, Sweden – osseointegration theory
•    1984 – dental implantology – official scientific acknowledgement
•    1988 – spreading into private clinical practice

Before receiving its official scientific acknowledgment implantology has undergone different stages of scientific and empirical research related to implant design, implant material, surgical methods, etc. A plethora of researchers and dental practitioners have contributed to its development.

And the result is…

Implantology today 1
•    A modern, science-based and clinically-proven dental medical discipline aiming at the functional and aesthetic restoration of the masticatory apparatus and thus ensuring quality of life comparable to that of patients with natural denture.

Implantology today 2
•    Success rate as high as 95-98 % - the design of most modern implants allows for certain corrections to be made
•    Risk group patients – this group includes patients who do not take good care of their teeth, e.g. smoking, poor oral hygiene, etc.
•    Risk group medical conditions – these include certain bone diseases, non-stabilized diabetic conditions, acute heart and cardiovascular diseases and post radiographic treatment or chemotherapy.

A law was adopted in Germany in 1994 regulating these cases. 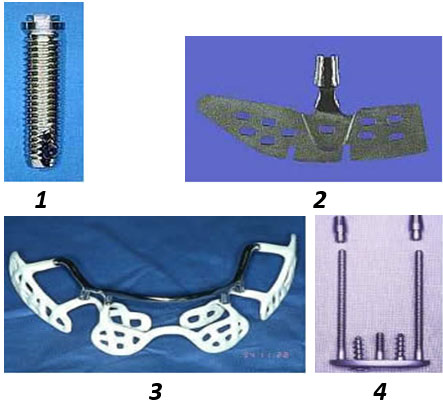 Four types of implants that are currently in use:
• intraosseous  - 1 and 2
• subperiosteal - 3
• transmandibular - 4 /Bosker implant/

Currently there are more than 10 implant systems imported and used in Bulgaria which are produced by different companies in different countries. And not a single one of them qualifies as “bad”. Among these are : T.B.R., Anthogyr, 3I, Bicon, Ankylos, Ihde-implant system,  Strauman, Nobel Biocare, IMTEC, AB-implants, Bio-effect, Neo Biotech and others. They differ in the type of implant surface, type of thread and, of course, the price. The undisputed leaders worldwide are Nobel Вiocare and Strauman. Each implant or modification of the same type is designed for a specific bone type. The dental practitioner must make the best match for each individual patient. Sometimes implants from different systems are combined for the treatment of a specific case when a single system does not completely meet the individual requirements. In other words, there is no such thing as a universal implant system! A dental practitioner needs to be familiar with and use at least three different implant systems including subperiosteal implants which would give him the freedom to combine and improvise.
In my dental practice I use all of the above mentioned implant systems except IMTEC, 3I and Bicon (see “Original multi-type implant concept“).

In 1991 I defended a patent for subperiosteal implant eliminating patents from USA, Sweden and a European patent. Most of my specializations are with the Anthogyr system. Anthogyr is a French company which is among the largest implant manufacturers worldwide and I was awarded a certificate to be their lecturer for Bulgaria. 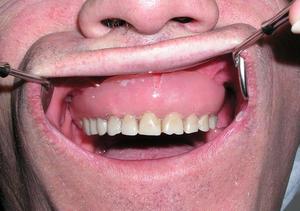 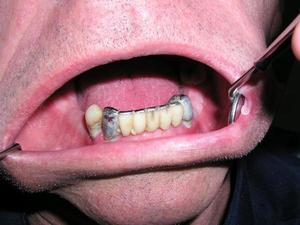 Outdated and worn out bridge 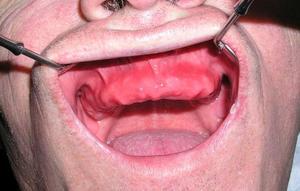 Allergic reaction to the plastic material of the prosthesis 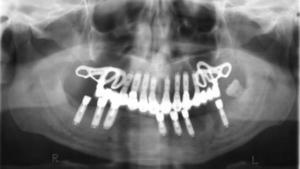 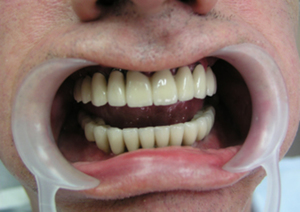 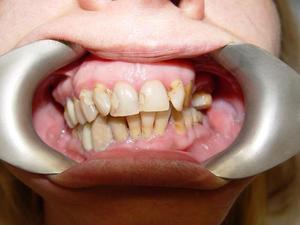 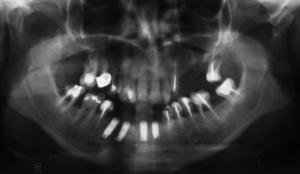 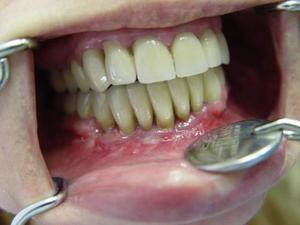 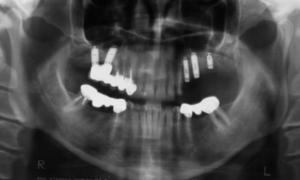 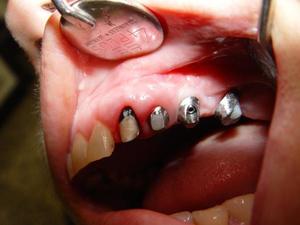 The patient at a certain treatment stage 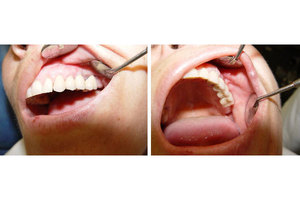 ORAL IMPLANTOLOGY: THE BEGINNING - Part I

The beginning was back in 1972 when I was still in my fourth year as a dental university student. I was admitted together with nine of my colleagues to an internship programme in the former German Democratic Republic.

I would like to bring to your attention a clinical report, with which I attended the First Anniversary Scientific and Practical Conference of TNTM, on the occasion of the 1300th anniversary of the founding of the Bulgarian state in 1981 in Stara Zagora. T

The number of teeth is constant with both at temporary and permanent teeth. Sometimes, however, there are deviations from these norms, which we generally divide into three groups:

I have been involved in dental implantology for 42 years. I have specialized in a number of Western European countries such as Italy, France, Switzerland and Germany, as well as in the USA and Israel. In the meantime, I protected a patent for a subperiosteal implant and wrote a book summarizing this experience.

Surgical Techniques for Creating Conditions for Intra-Bone Implantation when missing

… Or what is the view of the Germans about these things and how they do bone grafts?