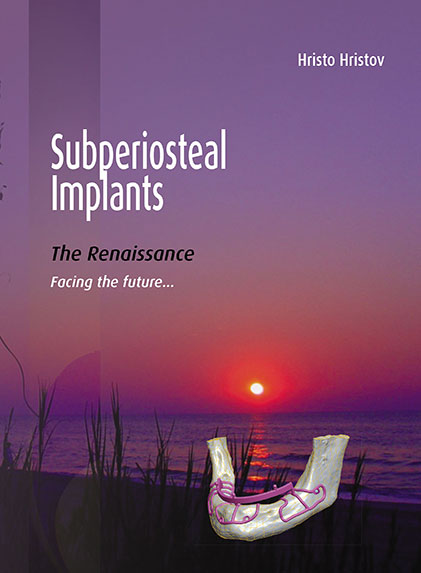 Subperiosteal implant solution is an old method, dating back to the 40s of last century. The design of subperiosteal implants (SPIs) appears to be the first in the contemporary history of dental implants. Because of the failures, due to the early design with small SPIs spaces and the rapid development of intraosseous implants after 80s of the 20th century, when Branemark released his osseointegration theory, it seems as if the subperiosteal implant solution was pushed aside. Additionally, its unattractiveness to the patients played considerable role to this, since it has been done in two surgeries.  Along with the development of computer-aided technologies (CAT), it was revived again after the year 2000. Moreover, supported by these technologies, the method makes a major request for further development and improvement and thus to take its rightful place in dental implantology and practice.

The necessity of writing the book under consideration was provoked by two reasons: first, the accumulated extensive empirical clinical experience (40 years), and second – the gap in the literature dealing with subperiostеal implantology (SPI).

Summarizing the global experience in SPI, analyzing it, and proceeding from the up-to-date concepts, I have tried to break some stereotypes both in terms of the solution itself and the SPIs shape, as well as the method of their construction and surgical methods of placement. I have classified the types of incisions and muco-periosteal flaps and adapted the method to make dentures on such implants in accordance with the agreed standards in periodontology and orthopedic dentistry.

As a result of years of experience in the field of SPI, my invention of such an implant has been born, which has contributed to the enrichment of the international experience in this regard. With the years of accumulated clinical experience, a multitayp implant concept has emerged whereby practitioners, by improvising, in order to master a dental clinical case can combine not only various implants but also implants and natural teeth as anchors. This requires a very thorough theoretical and practical training of the dentists who should know and master at least two implant systems, one of which is to be SPI.

I have proven in practice that the success of the intraosseous and subperiostеal implants is comparable. In light of the CAT development, SPI acquires new values ​​and dimensions in terms of its clinical practice application. In fact, the SPI is in its Renaissance nowadays. It is an established scientific fact that maxillae and mandibles atrophy at the same speed in both cases – with SPI and when wearing loose dentures. This fact favors the solution of prosthetics on SPIs to this of loose dentures structures - a solution which in my view should and it is already time to go down in history.

The aforementioned data has also been confirmed by my own research, carried out using the finite element method, which revealed that the pressure on the bone under the SPI’s head is significantly lower than the chewing one, and that the deformation of the latter is negligible.

That gives grounds to claim that the subperiosteal implant solution is a quick and reliable solution that can be used to rehabilitate the masticatory apparatus with fixed prosthetic. It is much cheaper than the costly and not guaranteed augmentations of the maxillae and mandibles, when lacking capacity/volume/mass for placing intraosseous implants.

As well as in the field of the other types of implants, the SPI field has its own unsolved problems awaiting their solutions.

Conceptually speaking, the SPI expects its bright future. The new opportunities provided by CAD / CAM technologies in terms of reducing the number of surgery intervention from two to one, remarkable precision of the product, as well as better physical and mechanical qualities due to the applied selective laser melting method (SLM) compared to the casting one, portend an optimistic view of the future. Personally I think that the mathematical method specifying the number and places of the SPIs heads is a significant contribution to dental implantology and practice. Moreover, this method is applicable for specifying the number and places of the intraosseous implants, if such are used. The method is founded on the classical equations and postulates from the statics and therefore it ensures the system with an absolute steadiness – bone-implant-prosthesis. Additionally, the creation of the software for automatic specification of SPIs number and places is also a significant practical contribution.

There are problems, failures and unresolved issues throughout dental implantology, however, the achievements are optimistic. Based on analysis, the scientists of the University of Massachusetts have concluded that during the 21st century, dental implantology will be a major share in the masticatory apparatus orthopedic treatment.

Let me conclude with a memorable thought of the great implantologist Hulbert - "Implantology is a triumph of hope in the midst of failures." 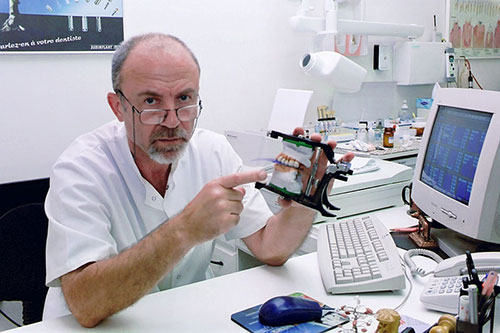 This book is the first ever attempt to discuss a very specific field of dental implantology which has been somewhat pushed aside by the whirl of modern implantology development. The main objective is to summarize the worldwide experience in subperiosteal implantology emphasizing the practical implications as well as to clarify the issue by reviewing the historical development of implantology, its current status and the prospects of its future development. It is written by a dental practitioner addressing fellow-dentists and offers a rich blend of history, scientific achievements and years of empirical experience.

The book is intended for a fairly wide audience including general dental practitioners, dental surgeouns, orthopedicians, periodontists and university students interested in dental implantology. Hence the resemblance to a textbook.

This book fills in a gap in professional bibliography. On one hand, it will enrich the knowledge of everyone interested in the area. On the other hand it could serve as a great aid in the development of conceptual clinical thinking especially among young dental practitioners with a focus on resolving unusual cases in their practice. Furthermore, I find it fair to my colleagues and patients to openly disclose what I have learned in my 40 years of experience.

The price of the book is 500 Euro. Can be ordered by email, shipped via DHL and paid on delivery.