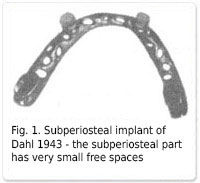 Many authors have worked on the development of subperiosteal implantation, looking for a way to avoid in most cases the impossible prosthetics of patients with total edentulousness and advanced atrophy of the alveolar bone. Despite the rapid development of intraosseous implantation and the great success of their Osseo integration, implantologists have sought alternative treatments for cases requiring enlargement of the atrophied bone when it is unsuitable. This is usually associated with the use of autografts or the use of expensive bone substitutes. It is also associated with multiple surgical interventions, difficult and risky to perform, as well as prolonged waiting for the formation of new bone, during which time the patient is without functional prostheses.

From the appearance of subperiosteal implants in 1943, when they looked the way shown in Figure 1, to the present day they have changed a lot in terms of design. Modern oral implantologists use subperiosteal implants with wide spaces between the peripheral "frame" and the transverse "ribs", as shown in FIG. 2. The extracorporeal part, the so-called "heads" of the subperiosteal implant vary in number and location. For example, they can be from one to six depending on whether it is distal unrestricted, intermediate or total edentulousness of the jaws. However, the operative method is the same to this day. To make a subperiosteal implant we have to make a mucoperiosteal lambo in the edentulous area, routine surgical manipulation used in many other surgical dental operations and a bone impression, which in the presence of modern impression materials is not a problem and technically too similar impression techniques known from orthopedic dentistry.

Subperiosteal implants lie on the bone over a very large area. We fix them to the bone by means of screws, and subsequently fibrous connective tissue grows in the spaces between the ribs, which covers them completely (Fig. 3). 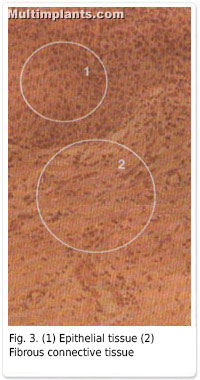 The modern way of life leads to the loss of teeth (mostly chewing) in younger and younger patients. According to Julian Woelfel, a professor of prosthetic dentistry at Columbus State University in Ohio, USA, dentists make about 1 million total dentures a year in the state, with an average age of 27-30. This inevitably leads to a number of inconveniences in everyday life, such as an intrusive sensation of a foreign body in the mouth, taste disturbance, reduced sensation of hot-cold, deterioration of phonetics, constant commitment to maintaining the hygiene of the prosthesis itself, etc. things that ultimately account give unsatisfactory quality of life to the patient. Not to mention that there are professions that people cannot practice in any way if they have removable prostheses.
In my opinion, formed in my daily implant practice for 23 years, patients come to this type of prosthesis for the following reasons:

1. Fear of the patient from surgery.
2. Insufficient in height and thickness of alveolar bone for intraosseous implantation and related long-term surgical interventions to enlarge the bone to make it suitable for such.
3. Financial reasons.
4. Ignorance theoretically and lack of mastery of the operative technique of subperiosteal implantation by practicing dentists.
Today, more and more implantologists are showing interest in the method of subperiosteal implantation in order to create the missing supports for fixed prosthetics. Also, more and more patients who have lost part of their teeth or are completely toothless, want fixed prosthetics, which is possible only on implants and which should be performed in the shortest possible time and at the optimal price, giving the opportunity for good nutrition and aesthetic appearance. Given that an intraosseous implant waits 3-4 months for Osseo integration, and even more so the biological term in bone augmentation surgeries, then when it is unsuitable, and not least the cost of all this, can it is said that subperiosteal implantation and subsequent fixed prosthetics is a very tempting alternative for both patients and implantologists. The term for performing a subperiosteal implant is 1 month, which includes the two surgical interventions - the one for taking a bone impression and the one for placing the implant. In addition, the subperiosteal implant does not need Osseo integration, which allows us to place a bridge on it and load it functionally almost immediately after surgery. In practice, these are 2-3 weeks - 1 for suture removal and another 1-2 for final scarring and epithelialization of the surgical wound, which allows us to take an impression of making the prosthetic structure. The cost of one subperiosteal implant is much lower than that of the intraosseous implant and several times lower than several intraosseous, in cases where it is necessary to place a larger number of implants.

I present to your attention a clinical case treated by subperiosteal implantation and subsequent bridge prosthesis with metal ceramics.

Woman aged 40 years in good general condition. Loss of 14, 16, 17 and 18 teeth. She does not want removable prosthetics. Radiologically - a clear pneumatic type of sinus, the so-called „sinus procedans“.

І-st treatment plan: I proposed a "sinus lift" operation followed by intraosseous implantation to create bridge prostheses, which the patient refused due to financial reasons, the operational risk and the duration of the intervention.
II-nd treatment plan: Alternative proposal - subperiosteal implant with 2 heads, for restoration of 16 and 17 teeth, metal-ceramic bridge covering 13, 15 teeth and both heads of the implant as bridge supports and 14 - bridge body.

Two years later, the patient feels well, eats on the bridge and is satisfied with the aesthetic effect. 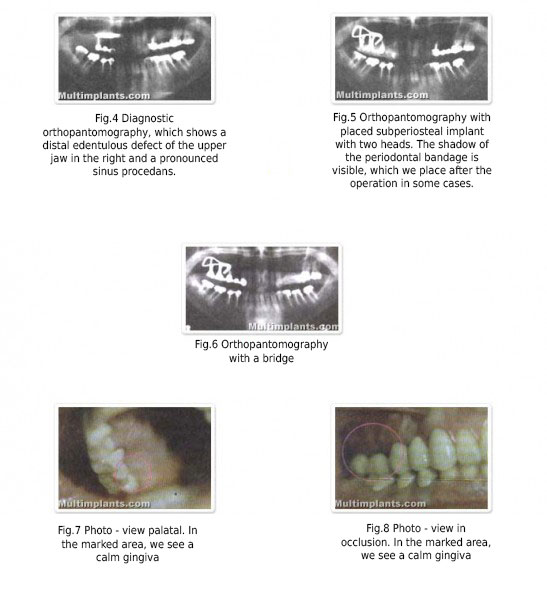 Subperiosteal implantation is a relatively fast and not very difficult to perform implantation method, consisting of known elements of the surgical technique in other types of surgical dental interventions, known impression techniques and routine prosthetic methods. It combines an optimal combination of speed, price, functionality and aesthetics. We make the subperiosteal implants according to the usual dental methods - modeling, casting and polishing. All this makes this method a good alternative in the treatment of dentition defects.