In the following study was considered the most widely used by implantologist structure subperiosteal implant. The structure has been analyzed by finite element methods. From the inventory of research it is found that this structure is not optimal in terms of distribution of chewing pressure on bone and stress in the construction. It is determined that more optimal design is needed.
Key words: RAPID PROTOTYPING, DIRECT METAL PRODUCTION, DIRECT PLASTIC PRODUCTION

Introduction
Subperiosteal implants appear as a last resort to place a fixed prosthesis on a patient in whom the intraosseous implants have compromised or the patient has reduced bone density. Because we place them on the bone below the periosteum, this type of implant distributes the masticatory pressure over a relatively large area. Hence, their name subperiosteal implant (SI). We place a fixed prosthesis on the abutments (heads) of the placed implant. 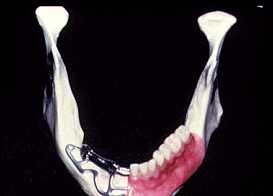 The concept of SI originated in 1943, when the founder Dahl / 2 / implanted the grill shown in Fig. 1, with four stumps, on which he made a fixed prosthesis. Sometime later, he implanted a similar one in his lower jaw with advanced atrophy. 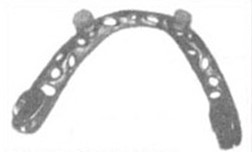 It is noteworthy that the subperiosteal part is relatively massive, with very small free spaces. This does not ensure good adhesion of the mucoperiosteal lambo to the bone and disrupts its nutrition by the periosteum. This in turn leads to bone atrophy / 1 /.

Fig.3 The evolution in the design of NE (from bottom to top and from left to right) / 2 /

The research of this type of implants and the accumulation of experience leads to a tendency to lighten the structure, expand the free spaces and externalize the circumferential frame shown in Fig.2.
However, there is no consensus on the construction and objective criteria for its evaluation.

Research and results
On a simple section of the lower jaw we build, a stylized most commonly used form of partial SI with one abutment, without a place for fixing with a screw. The chosen model is the most common SI, which we use in the case of 1-3 missing teeth. Characteristic - the masticatory load is on the head and the adjacent 1-2 healthy teeth. If possible, the entire load should be borne by the SI, and the teeth should perform a supporting function / 1 /.
We investigated the strength and deformation behavior of SI with analysis by the finite element method. The contact between the NE and the bone is friction with a coefficient of 0.4 / 4 /.

Bone model
The most common implementation of this type of JI - after taking an impression of the bone or reconstructing it from tomography, the dental technician models directly on this image. Figure 4 shows the resulting structure. 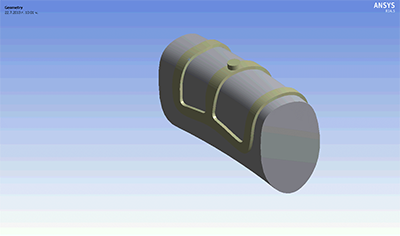 Fig.4 Model on the bone

The model is loaded with 600 N ((60 kg), which is equivalent to the sum of the masticatory forces of the upper jaw, in the most common case in dental practice, missing 5,6,7 teeth. The direction of thrust is normal to the plane of the head.

The results obtained are as follows: 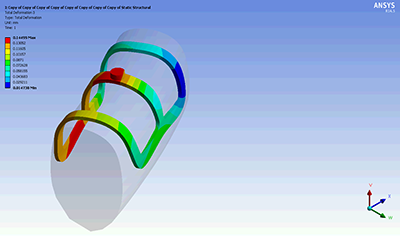 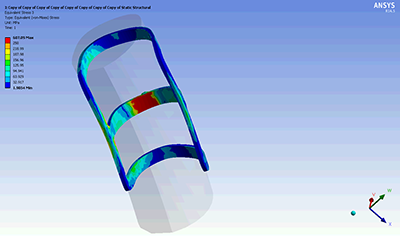 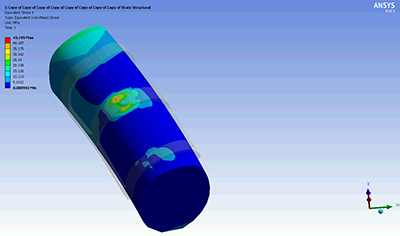 It is clear that only the head is under pressure and it transmits directly to the bone. The rest of the SI hardly carries.

Model with a gap between the implant head and the bone

In order to induce a load distribution over as much of the SI frame as possible, more trained implantologists set a gap between the rib supporting the head and the bone shown in Fig. 8. Raw recommends that it be about 0.5 mm, without taking into account that this leads to large transverse stresses that tend to dissolve the final frame of the SP. 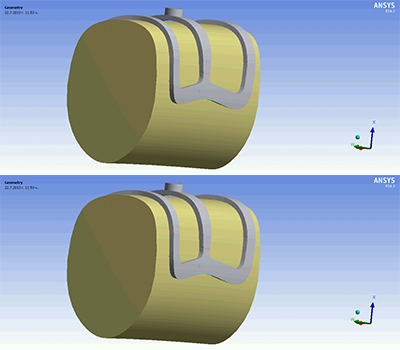 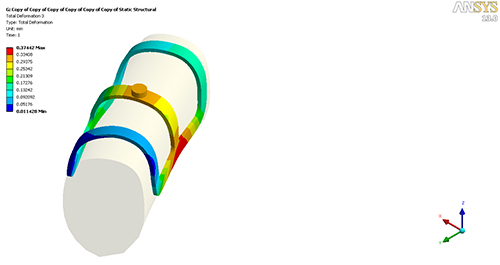 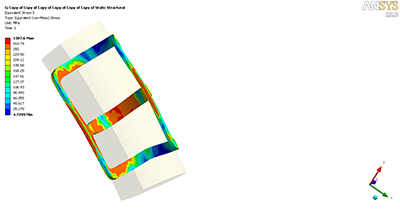 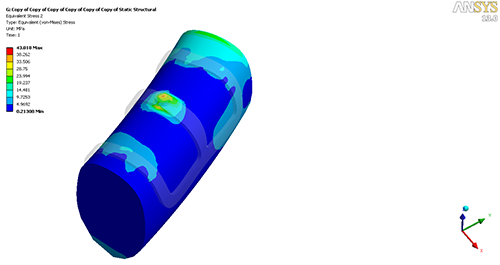 The obtained results show that the load distributed more favorably over a larger area. However, we must keep in mind that under pressure with increasing clearance between the SI and the bone we get dissolution of the implant bracket, which is undesirable. In addition, the stresses obtained are relatively high for the material.

Studies of the most widely used construction of partial SI have shown that it does not distribute the masticatory load well on the bone. In cases where there is a gap between the implant and the bone, its size must take into account the masticatory force and stiffness of the implant so that the head rests on the bone before an unacceptably high voltage transmitted to the side surfaces of the bracket.
In future developments, we plan to find the optimal shape of the implant to obtain an evenly loaded structure and optimized bone load.

We carried out this research under project DUNK-01/3 of the Scientific Research Fund at the Ministry of Education, Youth and Science.